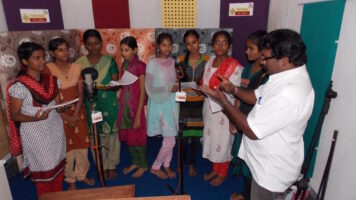 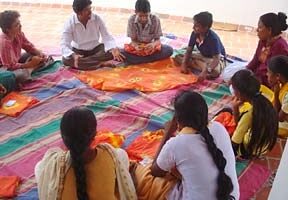 Funded by World Education, Boston, through the Strooks Grant -U.M.A.(Using Media to reach Adolescents about Reproductive Health and HIV) is a special project for young girls and youth, using the arts to deliver reproductive health and HIV & AIDS information linked to sex education. Field testing of innovative training tools – some sources created by Nalamdana and some created by the organization. This is a three year funded project, started in May 2009 and will continue through 2010 and 2011, until April 2012.

Starting with 4 sites, 2 schools, one college and one teacher’s training institute, this project field tested a new flip chart story, Penin Perumai created by adolescent girls, to disseminate information about puberty, reproductive health, and gender. The results were very encouraging, and in year two, further copies of this flip chart are being made and Nalamdana hopes to be able to distribute it to school teachers and others, along with a user guide to enable them to explain these issues to their students and other adolescent girls. This flip chart has now been made into a short film, which is going to be field tested now, in the second year of this project.

The adolescent boys at some sites are being given the same information in 2010-2011 (year two), of this project.

Nalamdana’s already existing materials like the Azhage Va training film, the HIV & AIDS jigsaw puzzles, etc., were used, along with one on one interactive sessions, to share basic information on HIV and AIDS. (Ways in which it spreads, ways in which it doesn’t spread and ways in which it can be prevented)

Girls created an audio tape of ten songs – on rights, importance of education and hygiene. The tape was used to create dance competitions among target peer groups – and prizes were given to best teams. Learning through music and dance was fun!

An audio CD on health issues, by adolescent girls, created under the South India Girl Child Initiative, (SIGCI) project, is being used at some school sites for dance and song competitions, there. By singing and performing to these songs, the girls learn and understand the lyrics and the messages behind them better.

In 2010-2011, a one year post evaluation for message retention is being carried out with the same sites, as well as the field testing with an Indian Audience of an animation film on gender by Insituto Promundo, Brazil.

This film called “Maria, Once Upon a Girl” has been used in Latin American countries successfully but needs to be tested in India to see if the audience here can relate to the context and issues, in the form that it is shown in this film, or if a new film with Indian context needs to be made.