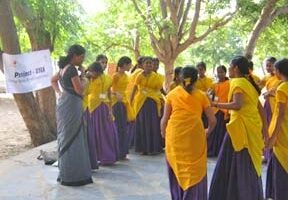 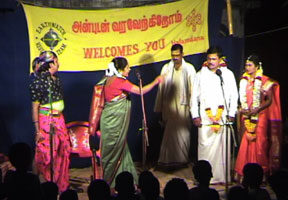 Nalamdana’s special short feature film in Tamil, Maaya Changu (Magic Conch Shell), teaches children, parents, care givers and general public about child rights and child safety. The story that is crafted in a sensitive, age-appropriate and entertaining manner helps children understand how to avoid being abused and exploited. It also helps caregivers and parents learn how to listen to their children when they are trying to tell them something is wrong and also to address and report child abuse.

Certified and cleared by the Censor Board, Maaya Changu also enjoys the distinction of a special commendation letter from them, citing that the film is cleared for both private and public viewing by all above 12 years of age, and children with adult supervision (so that the parents and caregivers also understand) if under 12 years of age.

Key Messages
This story is intended to raise awareness and understanding of key issues around child rights and covers the following:
– Fundamental rights of the child related to personal safety
– Good touch and bad touch
– How a child can protect herself
– How parents can protect their children and be aware if there is anything amiss
– Helpline for child abuse (Toll Free 1098) and other available services

Recently, the Nehru Yuva Kendra (NYK), Tamil Nadu chapter, after viewing the film has asked Nalamdana for 6200 (one for each of the 200 youth clubs in 31 districts) copies for screening among their own network of youth all over Tami Nadu and Pondicherry.

How Can You Help?
Nalamdana is looking for active ways to distribute this excellent film throughout the Tamil speaking populations in India. We are looking for sponsors to assist in the following ways:

Option A Sponsor 200 copies per district @ Rs.100 per DVD, and get your name and logo printed on the jacket. These will be distributed through the NYK route.

Option B If you wish to sponsor screening in local schools /colleges, workplaces or communities, Nalamdana can work out a special project and do so @ Rs.3000 per screening, using LCD projector and speakers, and also display your banner in the venue. DVDs can be purchased at Rs. 100 per copy.

The DVD price is negotiable on bulk orders. With the proceeds from the DVD, Nalamdana conducts further programming on child safety and lifeskills.

Also, for those sponsors coming in with Rs.1,00,000 bulk copies we can include their advertisement or slide into the DVD before the film starts or at the end.

About Nehru Yuva Kendra
Nehru Yuva Kendra was started in 1972 by the then Ministry of Education with the objective of providing the non-student rural youth an opportunity to help themselves grow and get involved in nation building activities.

In 1987, all the existing kendras under the NYK scheme were re-organized into an autonomous body that was formed by a resolution of Department of Youth Affairs. As a result of this endeavor, Nehru Yuva Kendra Sangathan (NYKS) was formed. It has since grown to have kendras in 501 districts of India with a network of about a quarter (0.25) million youth clubs in as many villages.

According to a national study on child abuse, released in 2008, 53.22% of children all over the country (India) reported having faced one or more forms of sexual abuse.

In spite of the above finding, mainstreaming sex education as part of life skill and child protection continues to elude the Indian school curriculum. Statistics from the National AID Control Organization (NACO) show new HIV infections are occurring among low risk, young women and adolescent girls. These vulnerable groups do not have the opportunity to learn/discuss issues on sex, gender and making informed choices.

Statistics of the Prevalence of
Sexual Abuse in India

The first ever National Study on Child Abuse in April 2007, covering 13 states in India and a sample size of 12,446 children was released by Minister for Women and Child Development showing these stark reality figures:
More than 53% children report facing one or more forms of sexual abuse
Almost 22% faced severe sexual abuse, 6% sexually assaulted.
50% of sexual offenders were known to the victim or were in positions of trust. (family member, close relative, friend or neighbor)
5-12 years group faced higher levels of abuse, largely unreported
Not just girls but young boys are also at risk.
Severest sexual abuse in age group of 11-16 years.
73% of sexual abuse victims were in age groups of 11-18 years.

Tulir – CPHCSA’s study in 2006, conducted among 2211 school going children in Chennai, indicates CSA prevalence rate of 42%. Children of all socio economic groups were found to be equally vulnerable. While 48% of boys reported having been abused, the prevalence rate among girls was 39%. 15% of both boys and girls had been severely abused.

Survey conducted in India in 2001 by Save the Children, Sweden found that:
68% had faced physical abuse
46.6% faced severe abuse leading to injuries
32.2% had their private parts touched by the abuser
and 20% were forced to have sexual intercourse

Another 1997 study on middle and upper class women from Chennai, Mumbai, Delhi, Kolkata and Goa by RAHI revealed that 76% of respondents had been sexually abused as children, with 71% been abused either by relatives or by someone they knew and trusted.
Samvadas’s 1996 study of students in Bangalore states that 47% of the respondents had been sexually abused; 62% of whom had been raped once and 38% of whom had suffered repeated violations.