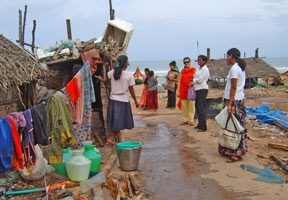 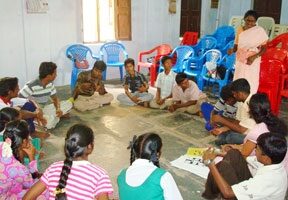 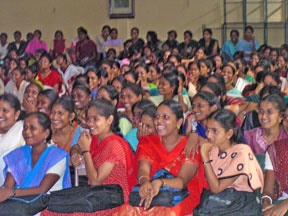 The South India Girl Child Initiative, (SIGCI), is a three year project funded by World Education, Boston. Of the four participating NGOs, two are from Tamil Nadu and two are from Andhra Pradesh. The most fascinating aspect of this initiative is its elbow room. It builds individual NGO working styles and encourages each of us to address common issues concerning vulnerable girls, through our own working experience.

The project helps us to identify and work with vulnerable girls, using participatory communication to educate and empower them through knowledge, accurate information and also impart skills in the following areas:

Child rights and importance of girls’ education
Adolescent health (emphasizing nutrition) and reproductive health
Awareness about HIV/AIDS
Scale up for sustainability through teaching theatre skills, music and participatory communication – so that each group will reach out to their peers.
The first 2 years

After conducting a baseline study (needs assessment) in some local slums, colleges and schools, through April and May 2006, Nalamdana chose four sites for the first two years:

To work with challenged girl children in one Government School in urban South Chennai, 7th and 8th grade girls (approximate ages 12 -13 years)
To reach 17 to 19 year old girls from challenged backgrounds in two community colleges in urban Chennai. Nalamdana selected Queen Mary’s college and MGR Janaki college, as both cater to lower income families. Over 90% of the 3000 plus students at Queen Mary’s college are studying free of cost.
To create an adolescent girls’ group in one urban slum, where out of school girls and those attending local schools can converge and meet often, learning skills and exchanging ideas. Nalamdana selected the “Urur Alcot kuppam” where we support the local day care centre and have also worked in the past. As of December 2006, around twenty girls have started meeting regularly. During January 2007 we ran theatre training workshops and they performed for their community.
All sites are currently active. We used different methods in each site, as we are deeply interested in methodology research. We will be able to share this information with many of our partners, through training modules, by the end of these three years.

Direct target audience: 150 school girls from the 8th and 9th grades in the corporation run school, 50 + 50 college girls in the 17 – 18 year age group in the two colleges and some 20 adolescent girls in the urban slum group are being covered so far. Total: around 270 girls.

Indirectly: mothers of pre-school children in the day care centers where Nalamdana works on a nutrition related project; teachers; other college students, numbering some 1500 girls, have been sensitized through trained drama teams on their own campus.

As part of the HIV/AIDS education, Nalamdana showed their training tele film on HIV/AIDS at one of the colleges, followed by an interactive discussion about the film. The same model is being followed in the second college. Also, one live drama for about 500 college students was held during the World AIDS week as a first level AIDS awareness program.

Skills development sessions: theatre workshops, focus group discussions and other fun programs such as music training and games are being held at school sites, to induce more cooperation from the students and management. It is hoped that such skills will help the students themselves campaign for these issues so that they could become agents of change.

As part of networking and learning, the Nalamdana team held a few sessions on HIV/AIDS at Aseema’s sites and hopes to help their staff team acquire new skills soon through the planned IEC workshop for SIGCI partners in 2007. Some of the Nalamdana team visited the Andhra Pradesh NGOs, GVS and CARE Kuchinerla, during November, 2006.

Further cross visits and partnership learning is planned through 2007. The excellent rapport created in these sites is likely to be utilized through 2007, with planned activities and scale up project work.

This project moved into its third and final phase during 2008-2009. Targeting vulnerable girls in city schools and select communities where school drop outs meet for a community video project, Nalamdana has conducted several training programs. The girls, trained through this program, present to their peers through drama, mime, dance and video.

Issues of gender discrimination, poor nutrition, social and the cultural handicaps faced by girls are addressed and empowerment through education has been happening quietly. At the end of 2008 or early 2009 there will be a festival of the Girl Child held in the city, including all partner organizations working on the same issues.

Aseema Trust and Nalamdana (Partners on the South India Girl Child Project funded by World Education, Boston) releaseda CD 8 songs) called “KUYILLUM MAYILLUM” meaning “Cuckoo & Peacock” to symbolise the songs created by vulnerable girls. Each song is on an important issue as identified by these young girls. Trained by Nalamdana, some have sung in the tape while others have written the songs. Trained by Aseema, some girls have learned to dance to the songs. The song and dance tape is being distributed Free in local schools and slum communities where Nalamdana works.

The CD created for and by vulnerable girls was formally released among 500 school students. At the event, the Consul General of the United States of America in Chennai, David T. Hopper, released the tape and first copies were given to special guests; Ms. Shakuntala Sharma, Secretary, The Children’s Garden School and Mr. S. P Balasubramaniam, noted playback singer. Speaking on the occasion the representatives of Aseema Trust, World Education Inc and Nalamdana stressed how this project helped reach vulnerable girls.

Nithya Balaji of Nalamdana, announced that every CD supported with a donation of Rs.50 will help Nalamdana donate Rs.5 of that towards a very special CARE school in Kuchinerla, A. Pradesh, where this partner NGO rescues 100 girl children per year from bonded hazardous child labour.

Donations can be made to Nalamdana in India or through the Friends of Nalamdana, in the U.S. (see contact page) Nalamdana will create more copies for free distribution and also periodically collect the donations accrued and pass them on to the CARE school.